This is a diorama that includes a mantra about cattle. Some years ago, I created eight pastoral poems, which are actually poems, limericks, songs, a mantra and even a prayer. Each is dedicated to one of the major livestock species in New Zealand. For each poem, I have created a diorama in 1/87 scale. These are real H-Zero Artworks. Here is the Cattle Mantra for you to enjoy. There are about 10 million cattle, 5 million dairy and 5 million beef cattle, in the country. I have published these pastoral poems, including the photos shown here, as a book “Pastoral Poems in HO” – ISBN 978-0-473-32310-3.

Picture frame (21cm x 21cm x 5cm), figures from Preiser and Noch, grass, acrylic paint, and the usual modeling equipment. The car is from Busch. The sadhu is from the Atlantic, Ancient Egypt set. 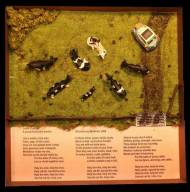 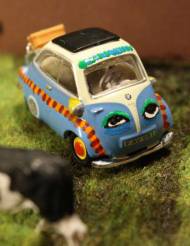 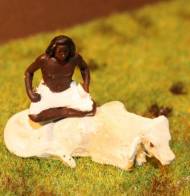 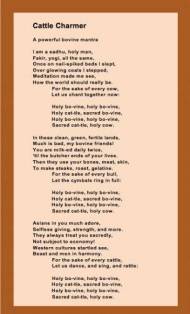